BAR by the Numbers

On July 1, 2019, the Bureau of Automotive Repair (BAR) incorporated Permanent Diagnostic Trouble Codes (PDTCs) as part of the Smog Check failure criteria for model-year 2010 and newer vehicles. This change fulfills the requirements of California Code of Regulations, title 16, section 3340.42.2(c)(5).

PDTCs are very similar to regular Diagnostic Trouble Codes (DTCs). However, unlike regular DTCs, they cannot be reset by disconnecting the vehicle’s battery or cleared using an On-Board Diagnostic (OBD) scan tool. The only way to clear a PDTC is to fix the underlying problem that originally caused the PDTC and its corresponding DTC to set, and then allow the vehicle enough drive time to re-run the monitor that identified the problem in the first place. When the monitor runs without identifying a problem, the PDTC will clear itself.

PDTC issues are ignored only after the vehicle has completed at least 15 warm-up cycles and been driven at least 200 miles since its OBD information was last cleared. The 15/200 limit is being established to prevent undue inconvenience to motorists who are trying to comply with the Smog Check Program requirements but are having trouble getting specific monitors to run to completion and ready for testing. Most vehicles will complete the self-diagnostic tests well before the 15/200 maximum limit is reached. A warm-up cycle means driving a vehicle so that the engine coolant temperature rises by at least 40 degrees Fahrenheit after the engine is started and reaches at least 160 degrees Fahrenheit.

During the first month of implementation, 3,124 vehicles failed for PDTCs that would have previously passed a Smog Check inspection. These vehicles all had recent codes cleared and a PDTC stored in the computer’s memory. Including PDTCs as part of the failure criteria for model-year 2010 and newer vehicles raised the failure rate on these vehicles from 4.2% to 5.6% as shown in the following figure. 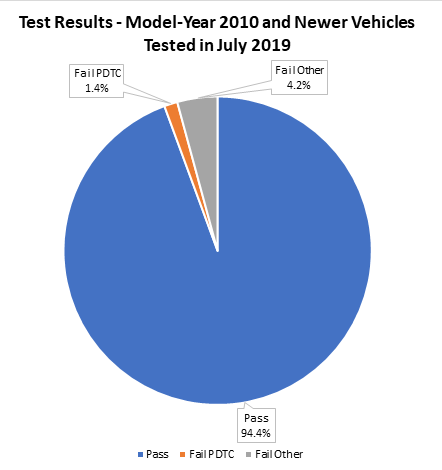 The top PDTC for each fuel type is shown in the following table:


In September, BAR re-examined the test records for these vehicles to determine their after-failure outcomes. Of the 3,124 vehicles that failed inspection due to a PDTC, 2,385 passed a subsequent re-inspection and were issued a certificate. Of the 2,385 vehicles that passed their re-inspection, 1,974 had a PDTC that was appropriately cleared by the vehicle’s OBD system. Another 411 vehicles still had a PDTC but passed their re-inspection because they met the 15 warm-up cycle/200-mile limit. The results are shown in the following table and figure. 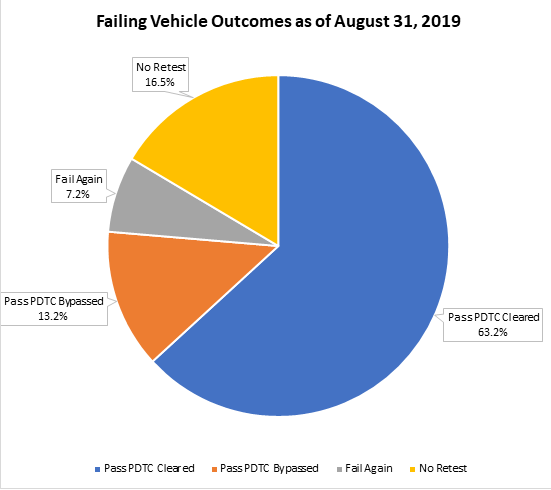